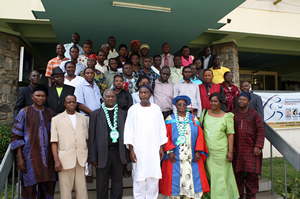 The Social Studies Educationists Association of Nigeria (SOSAN) is an educational professional body organized by and for all persons who believe in the principles of social education. It is an organization of learners, teachers, educators, curriculum developers, writers and qualified educational practitioners in the field of social education and or accepted related disciplines. It is a professional body which consists of professionally qualified teachers who have their origins largely from the social sciences and humanities. SOSAN is not a trade union but purely concerned with improving and strengthening the teaching and learning of social studies throughout the Federal Republic of Nigeria.

The formation of SOSAN was considered for the first time in 1966, the same year CESAC and The Aiyetoro Project (The Ohio Project) came up with a booklet titled "Social Studies for Nigerian Schools. The idea of forming a National body was initiated by Mr. M.A. Makinde, then a teacher in the Government Teachers' College, Ilesha. Mr. Makinde, who was one of the coordinators of the Aiyetoro programme, suggested that one of his primary aims of forming SOSAN would be to enable teachers of humanities, especially those involved in the pilot project, to come together to discuss their common problems, and be taught the new approaches in the teaching of their various subjects, viz, History, Geography, Economics and Government.

SOSAN was launched in a small ceremony in 1971 and was formally launched in 1972 during the first National Conference which was held at Oyo State. Professor Babs Fafunwa, then of the University of Ife was elected the first National President and Mr. M.A. Makinde was elected as the first National Secretary. The year 1971 was significant in the development of social studies, for it was then that, for the first time, the subject was considered by Nigerian Educational Research Council as one of the subjects for which a national syllabus was to be produced. The curriculum workshop was held at University of Ibadan Conference Centre, and the panel for social studies consisted of sixteen people drawn from different subject areas, mainly social sciences and humanities. This is relevant for most of panelists were already members of SOSAN. Also some members were sent to represent Nigeria at the International Conference of the African Social Studies Programme (ASSP) in Nairobi, Kenya.

SOSAN was not in existence during the pilot stage of social studies development in the country. The pilot activities in the social studies project in the then Western Region provided base for emergence of SOSAN. In the 1970s, which was labeled as the stage of controversy and reluctant learners, SOSAN's main function was to "sell" social studies to teachers in the classrooms, government functionaries in the Ministries of Education. Between 1971 and 1974, SOSAN was concerned with the task of having the concept of integration (not multidisciplinary) clearly defined and appropriate curriculum produced (production of curriculum for social studies in the primary, secondary and teacher education).

The introduction of UPE in 1976 forced many teachers into reluctant learners. Teachers of various subjects were drafted into teaching social studies and to attend special orientation courses organized for them by the Universities or the Ministries of Education in cooperation with SOSAN. Special sessions were devoted to practical orientation of teachers in the methodology and strategies of teaching the subjects during the Annual Conference of SOSAN since its inception. SOSAN was concerned with the activities of teacher training during the third and fourth periods of social studies.

The mission of SOSAN is to provide leadership service, and support for all social studies educators. The association devoted to supporting social studies education. SOSAN standards ensure that an integrated social science, behavioural science, and humanities approach for achieving academic and civic competence is available to guide social studies decision makers in schools. SOSAN serves as an umbrella organization for primary, secondary, college teachers and university teachers of the social studies in the interest of educating new generations of informed, responsible citizens. The central mission of SOSAN is to improve the integrated teaching of the social studies at all levels of education, from elementary school to college and graduate school.

To foster social education generally for the enhancement of the acquisition of necessary political, social and cultural knowledge, attitudes and skills for effective and responsible democratic citizenship.

The Social Studies Association of Nigeria had been able to achieve the following:

SOSAN achievements are summarized as: